Cruising to the Northern Lights – Our Client’s Story

So you fancy seeing the Northern Lights and the coast of Norway? Hope this helps.

We travelled the first week of March aboard MS Nordlys from North to South (Kirkenes to Bergen) primarily because the Nordlys had been the last ship to be refitted.

Flights, arranged by Hurtigruten, were Heathrow to Oslo, a four hour layover, then on to Kirkenes. Despite the wait there was opportunity for a meal and no stress trying to catch the connection.

Kirkenes is well inside the Arctic Circle and very cold – not dissimilar to climbing into a freezer so you need to have a jacket to hand for the short walk to the terminal and then to the provided bus service. Decent footwear also recommended because everywhere was covered in about six inches of solid ice. Road and pavement are as one! Locals scoot to the shops on ‘Boris Boggans’. 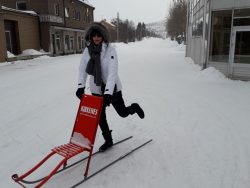 The provided overnight accommodation and breakfast was fine and the restaurant open in the evening. Time in the morning for a quick look around.  Jackets, hats, gloves and warm boots needed. The most northerly charity shop in Europe worth a visit. Bus collects from hotel for short trip to Hurtigruten terminal.

Ship well-appointed and service excellent. Nicknamed, by us, the MS Handgel,  you will be regularly maintaining hand cleanliness and reminded, should you be remiss enough to try and sneak past. Leave luggage in baggage room and go for buffet lunch whilst cabins are prepared. Food very good. Breakfast and lunch are buffet style whilst a set dinner, reflecting local cuisine, is served at table. You are initially allocated a sitting for the evening meal which apparently you can change if you want.  (found that out after the last meal!) It does have the advantage of introducing you to others.

Our Arctic Superior cabin on the fifth deck was the size of a large caravan and had everything you needed within arm’s reach. Looked at a posh suite which is more on the lines of a conventional hotel room – you pays your money! Never saw inside one the cabins on the lower decks, but they had smaller portholes instead of windows. None of the windows open for obvious reasons – air con. is standard. The ’Gulvvarmer’ switch, associated with the shower room was, I thought, a neat way of describing the air extractor, the unintended result being to keep the birdies from freezing outside. It is not! 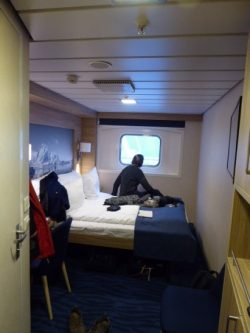 Winter scenery spectacular throughout. Ice and snow on the outer decks – you need to be wrapped up and the wind can be strong. Inside temperature comfortable and cabin ambiance adjustable.

The Northern Lights need a little preparation in advance. Assuming they are spotted, the Bridge will let you know and everyone is out on deck. Firstly, get the Northern Lights Photo Taker App (99p) for your phone/tablet. This increases the sensitivity of the frequency needed to photograph the lights and they will appear green (set to weak on screen) Conventional cameras with manual exposure can be set to a suitable ISO and shutter speed with no guarantee and compact automated cameras are even more difficult. Also be aware you might not see the lights as green. We both saw them as whitish grey streaks which is a product of age and eyesight sensitivity. Even the young Sami expedition leader sees them that way. Check out Google for an explanation. We saw other people’s App photos and they were excellent – ours were more modern art on a black theme! 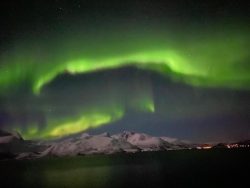 Excursions we felt were prohibitively expensive. Wine package also over the top so choose/drink carefully (£44 a bottle for an acceptable red!  Small glass of port or a beer £9)

This is a ferry so stops can be as short as 15min. Longer stops allow for limited site seeing and there are some quayside attractions – The Polar Bear Club, Hurtigruten Museum, Magic Ice and local stores. Passengers travelling in both directions felt the stops were more conveniently timed south to north. We thought the drama of starting in the north worthwhile.

Some notable high points include the Lofoten Islands, crossing the Arctic Circle and generally any narrow bits. Scenery is to both sides as you are threading your way through the channels. Other than the northerly open sea sections the water was mainly calm because of the protection afforded by the islands.

On board ‘Expedition Team’ kept everyone updated and, for those needing direction, well informed. The opera singing coffee bar attendant is worth a mention.

You vacate cabins by 10.00am and still have lunch to look forward to before docking, early afternoon, in Bergen. Transfer to the airport is in good time and so on to Amsterdam where you have 25 mins to make the connecting flight which is miles away and about to leave. The slightest delay or customs check and your connection is doubtful. KLM were fantastic and allowed us to sit in Buisiness Class prior to landing so we could get off snappish. We all made it just before the gate opened but only thanks to an early arrival, KLM and jumping queues at passport control (demand to be fast tracked). We would strongly advise asking for a later Heathrow flight if there is one. Bags, it would seem, have an easier time!

A trip worth doing at least once.

Guest Post by Mel Cunliffe, sailing with Hurtigruten in March 2020.