The following article is reprinted with kind permission from Travel Weekly. 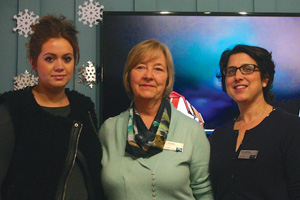 Kit with Priya and Verity

Kit Williams had intended to spend her retirement travelling the world.

She certainly hadn’t envisaged working seven days a week for an independent travel agency. But after a stint of part-time work for her son’s start-up Silver Compass, she found herself becoming more involved in day-to-day holiday sales from her home near Bath.

Around 18 months ago she became a full-time homeworker, while her son continued to work from his London home. And in the summer of last year she took the bigger step of moving into a retail unit in a former cider farm and managing two extra staff.

Kit, 64, says: “We had built the business up and gone as far as we could without going into a retail space and I had more work than I could handle.”

After spotting an opportunity to move into The Shed, where a farm shop, restaurant, cafe and shop units operate under one roof, and seeking advice from Global Travel Group, the agency’s consortium, Kit secured a space for Silver Compass at a reasonable rent.

“It was bare plasterboards and bales of straw when we moved in. We had to do all the flooring and plastering,” recalls Kit, who credits Global business development manager Joanne Briggs with giving her the moral support and encouragement to make the move.

As well as giving the agency new footfall, it gave Kit the opportunity to take her idea for a food and travel-themed event, Global Gourmet, to greater heights.

Kit was keen to raise money for charity Farm Africa, which Silver Compass already supports and which runs a Food For Good event.

“I realised ‘foodie travel’ was becoming a trend and I thought we could run it at The Shed instead of in a hotel, and run it off the back of the local Bath Food Festival,” she says.

The result was half a dozen tour operators presenting destinations linked to food or drink, from Cox & Kings’ Masterchef Travel to Travel 2, and half a dozen food and drink suppliers, at an event run under the auspices of The Great Bath Feast last October.

Around 250 people attended and the event led directly to six bookings, increased the size of the agency’s database and improved its profile locally. It also raised £650 for the charity.

“It was really successful and I would like to think this could be an annual event,” adds Kit.

For more information on Travel Weekly visit their website at www.travelweekly.co.uk.